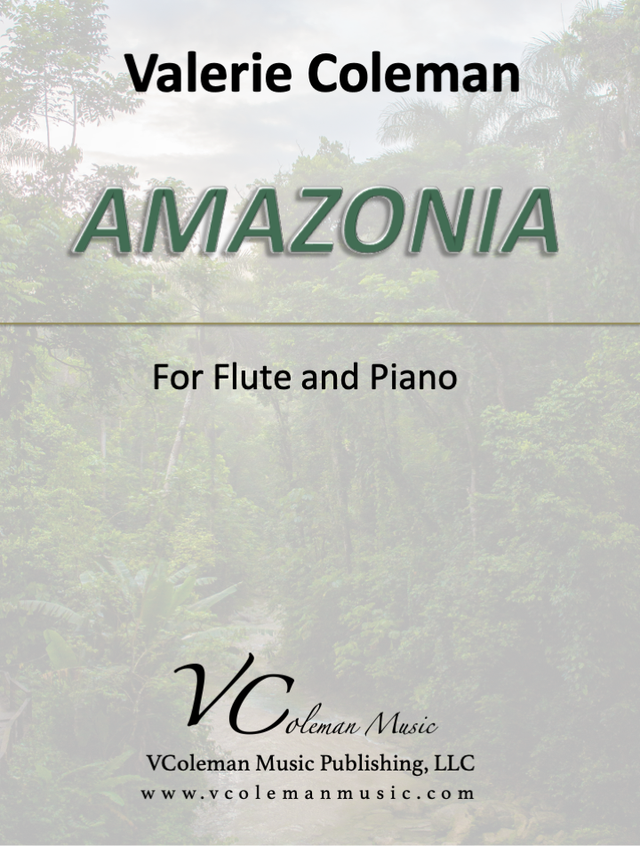 Amazonia for Flute and Piano (Print Order Only)

Amazonia is a commemoration poem of what is considered to be the “lungs of the earth”. The poem describes its natural beauty that progressively becomes destroyed, as the dark aspects of human nature intrude upon vitality. The work begins at Sunrise with the sounds of nocturnal animals like frogs and insects enjoying the last parts of the night, with the sounds of croaking and leaves moving erratically throughout the foliage. Tree frogs, Tamarin monkeys, and macaws sing their sounds, while drips of dew fall from the leaves, and provides a raindrop-esque motif throughout the first part of the work. The opening motif in the flute gives a fragmented taste of the grooves and rhythms found in Brazilian music.

As the Amazonia scene is set, a simple melody emerges representing the carefree children of the Amazon, who innocently play throughout the jungle and river, immune to the dangers that lurk around them. The melody itself is a sweet dance that turns to a more mature stance that describes the peaceful pride of the tribal adults. Theirs is an intentional way of life that is unimpeded by technology and urban landscape, greed and crime. Following a brief flute cadenza, the section ends with a still life Sunset of reds, oranges and yellows.

As the work unfolds, darker elements soon cloud the landscape, in a section called “Menacing”. The piano ominously marks the entrance of poachers and mercenaries into the rainforest, with an aggressive yet stealthy march. Their job is to drive out the tribes from the forest through intimidation and assault. Here the flute becomes the aggressor as its lower register articulates the word, fire in Morse code, as an impending signal to the burnings that will soon occur. Elements of Samba emerge within the following più mosso section, with the piano part dancing a macabre dance that symbolizes greed, as corporate interests circle the forest like vultures about to feast on the defenseless. Shouts, run, and anger precede the start of fire trickling through the rainforest, signified by a single note shared between the flute and piano that chromatically undulates and becomes more intense as the fires build and consume. Amazonia ends on an intense panic of shrieks and screams.

As the fires in the Amazon rainforest have decimated thousands of acres, we must remember the beauty of what once was.