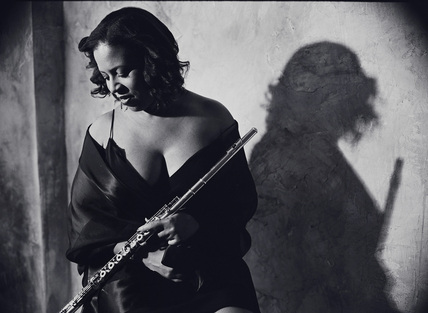 Valerie Coleman is regarded by many as an iconic artist who continues to pave her own unique path as a composer, GRAMMY®-nominated flutist, and entrepreneur. Highlighted as one of the “Top 35 Women Composers” by The Washington Post, she was named Performance Today’s 2020 Classical Woman of the Year, an honor bestowed to an individual who has made a significant contribution to classical music as a performer, composer or educator. Her works have garnered awards such as the MAPFund, ASCAP Honors Award, Chamber Music America’s Classical Commissioning Program, Herb Alpert Ragdale Residency Award, and nominations from The American Academy of Arts and Letters and United States Artists. Umoja, Anthem for Unity was chosen by Chamber Music America as one of the “Top 101 Great American Ensemble Works” and is now a staple of woodwind literature.

Former flutist of the Imani Winds, Coleman is the creator and founder of this acclaimed ensemble whose 24-year legacy is documented and featured in a dedicated exhibit at the Smithsonian National Museum of African American History and Culture in Washington, D.C. She recently founded and currently performs as flutist of the performer-composer trio Umama Womama.

Coleman recently joined the Mannes School of Music Flute and Composition faculty in Fall 2021 as the Clara Mannes Fellow for Music Leadership. Prior to that she served on the faculty at The Frost School of Music at the University of Miami as Assistant Professor of Performance, Chamber Music and Entrepreneurship. In 2021/22, she leads a year-long residency at The Juilliard School in their Music Advancement Program through American Composers Forum.

Coleman’s compositions are published by Theodore Presser and her own company, VColeman Music. She studied composition with Martin Amlin and Randy Wolfe and flute with Julius Baker, Judith Mendenhall, Doriot Dwyer, Leone Buyse and Alan Weiss. She and her family are based in New York City.